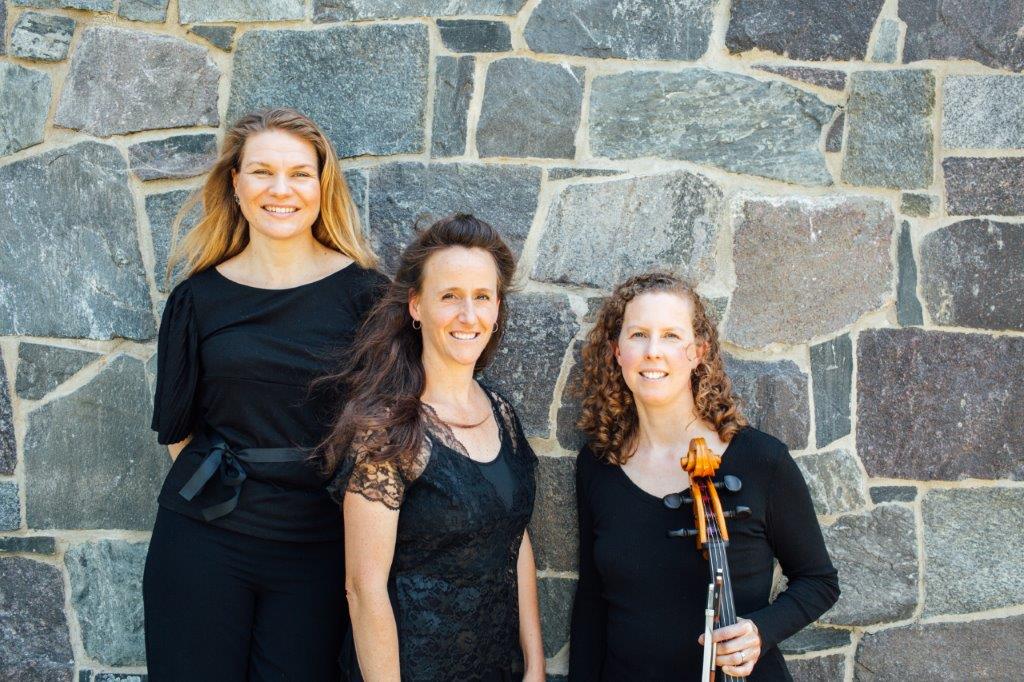 Resinosa Ensemble focuses on the performance of chamber music, working with living composers, and offering music slightly off the beaten path. The trio’s program, “Prelude to a dream” Meets “American Reflections”, will feature a well-balanced assortment of “night” music and music written by American composers featuring American poets. Included works are Andre Previn’s “Four Songs”, with poems by Toni Morrison; Lukas Foss’ “Capriccio, for cello and piano”; Bohuslav Martinů’s “Nocturne III, for cello and piano”; and Johannes Brahms’ “Two Alto Songs.” The ensemble will also present Boston-based composer Scott Wheeler’s “Three Night Songs”, which he recently arranged for them. Finally, Eastport’s own John Newell composed “Night Songs”, a set of seven songs incorporating poems by Sara Teasdale, for the ensemble. “Newell’s music is wonderful,” said Convey, “and the Resinosa Ensemble considers it an honor to perform.”

In the next few seasons, Resinosa will feature more new works by Maine composers, including Marianna Fillipi, Rick Nelson, Nancy Gunn, and Daniel Sonenberg. Resinosa has performed throughout Maine, at venues such as Bowdoin College’s Studzinski Recital Hall; Bates College’s Olin Arts Center; Colby College’s Museum of Art; and was a featured ensemble at the Back Cove New Music Festival 2018.

Originally from Evian, France, Mezzo-Soprano Joëlle Morris has performed throughout Europe and the United States and is admired for her versatility, from the concert stage to the operatic arena, in intimate jazz settings and French cabaret or simply sharing her gifts as voice teacher and coach. Morris has sung across the United States, France and Switzerland, and since relocating to Maine in 2011 has appeared with the Bangor Symphony Orchestra and the Mozart Mentor Orchestra, and has given recitals at the Franco Center, Waterville Opera House, Colby College, Bates College, Bowdoin College, Nordica Auditorium and the Early Music Festival in Portland. Morris is co-founding member of the Resinosa Ensemble and the Amethyst Chamber Ensemble in Maine as well as the musical director of CODA chorus in Winthrop, Maine. In addition to annual summer appearances in France, she is a Music Associate in Voice at Colby College, Bates College and holds a private studio in central Maine.

Cellist Eliza Meyer performs regularly with chamber and orchestral ensembles around New England, including Resinosa Ensemble and the Portland and Bangor Symphonies. She teaches at UMaine Augusta and Pineland Suzuki School, in addition to maintaining a private teaching studio at her home in Vassalboro. She received her Bachelor of Music Degree and a Performer Diploma from the Indiana University School of Music, where she was a recipient of the Eva Heinitz Scholarship, and her Master of Music Degree from The Boston Conservatory, where she was a member of the Honors String Quartet and a winner of the String Idol contest. She has studied with Andrew Mark, Rhonda Rider, Tsuyoshi Tsutsumi, and Helga Winold.

Pianist Bridget Convey has found much fulfillment in collaborating with living composers, including Morton Subotnick, Mel Powell, James Tenney, Daniel Sonenberg, Vineet Shende, Elliott Schwartz and many others. As a soloist and ensemble musician, Bridget has been heard at venues such as Lincoln Center (NYC); Dorothy Chandler Pavilion (Los Angeles, CA); Ojai Music Festival (CA); Maybeck Performing Arts Studio (Berkeley, CA); Percussive Arts Society International Convention (Columbus, OH); and others. She received her Diploma from Mannes College of Music, NYC (Pre-college Division) 1989; BFA from State University of New York at Purchase 1993; and MFA from the California Institute of the Arts 1997.  Bridget can be heard on Navona, Cuneiform, Independent and Nataraja labels. She teaches piano at Bates College and has a private piano studio in Central Maine.

The Concert Series runs through August 30. Series tickets are $10, and youth tickets are discounted. Tickets may be purchased on the EAC site, or at the door. The Eastport Arts Center is at 36 Washington Street, Eastport, and at www.eastportartscenter.org, and is handicapped-accessible.