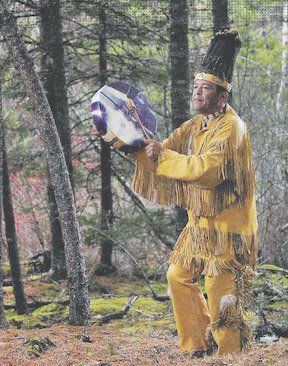 The Sunday Afternoons at the EAC series, a winter offering of informal and interactive programs every Sunday at 3 pm at Eastport Arts Center, will open with a presentation by Donald Soctomah and Dwayne Tomah featuring a group of recordings from the 1890s captured on wax cylinders. The cylinders were made in Calais by anthropologist Jesse Walter Fewkes, using an Edison cylinder recording machine. These 31 recordings were the first ethnographic field recordings ever made, worldwide. They contain songs, stories, ceremonies of various kinds and funeral songs performed by Passamaquoddy musicians and storytellers. The cylinders were originally in the Peabody Museum in Massachusetts, and currently stored at the Library of Congress. In addition to sharing these fascinating recordings, the program will include discussion and interpretation.

Donald Soctomah, a noted Passamaquoddy historian, has a particular interest in language and other cultural topics including petroglyphs. He has been active in the area of Passamaquoddy language preservation.

Dwayne Tomah, known as the Passamaquoddy ‘cultural language keeper,’ has spent considerable time in the ongoing project of transcribing the cylinder recordings.