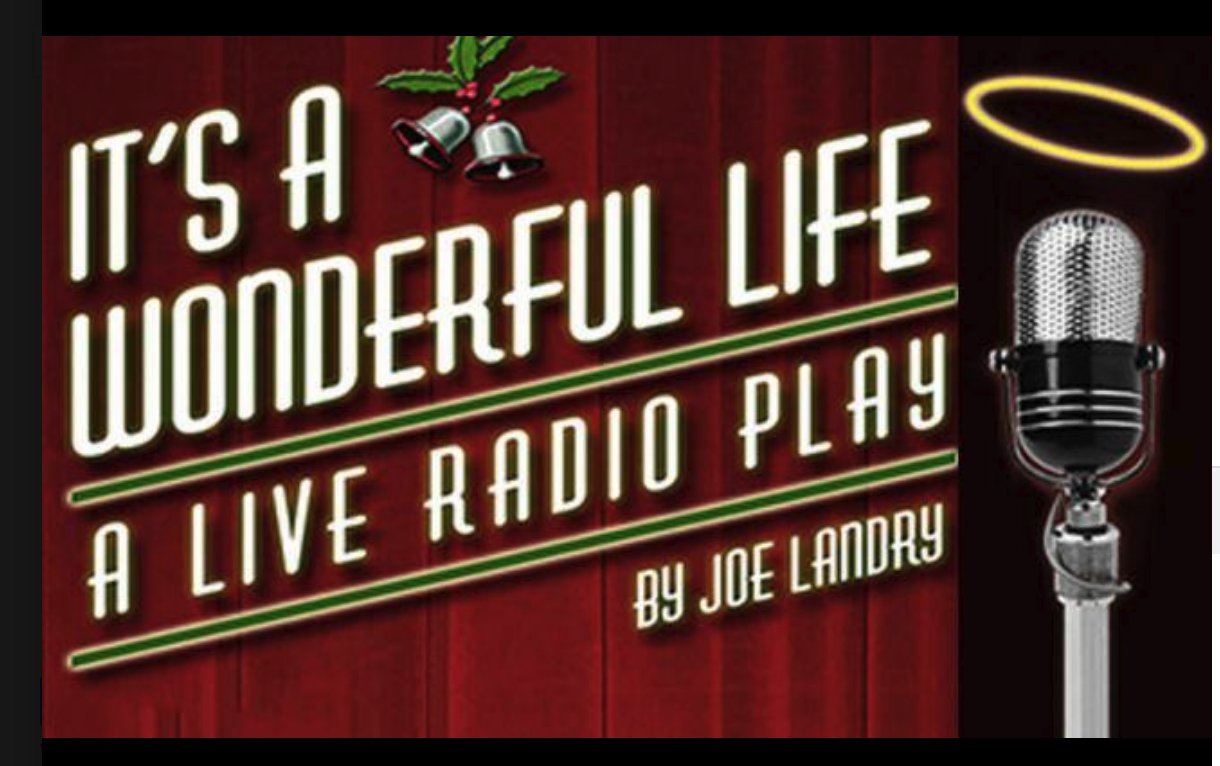 Stage East will ring in the new year with It’s a Wonderful Life: A Live Radio Play, adapted by Joe Landry, with two performances on Tuesday, December 31, 7 pm and 9:30 pm, at Eastport Arts Center. The tale is presented in the style of an old-time radio show, complete with voice actors, sound effects and music reminiscent of the 1940’s. There are more than 20 people involved in the production, some who are brand-new to the stage and many familiar faces as well.

“As soon as I heard they were holding auditions for this show I knew I wanted to be involved,” said John Leavitt, a Pembroke-based actor with Stage East and Magnificent Liars credits stretching back nearly two decades. “It’s fun to work with such a large cast of veteran and first-time actors who are all pulling together to help bring this amazing story to life.” For Leavitt, the production is also a family affair. “This is the first time I have gotten to be in a show with my son Owen, who is shaping up to be a fine actor, and my partner Lauren, who has never acted before but is inhabiting her role beautifully.”

“I work with children and encourage them to try new things. It occurred to me somewhere along the way that I needed to be brave myself,” said Jean Voelker, a first-time actress from Meddybemps. “I saw a Facebook posting about the play, and before I could talk myself out of it, I contacted Beth and arranged an audition. I love the movie version of It’s A Wonderful Life, and I am really looking forward to helping bring this version to the Eastport Arts Center.”

Many of the performers are tackling multiple roles and the challenge of differentiating their characters. Anson Bergonzi, an East Machias actor with Downriver Theatre and Blueberry Musical credits, as well as one previous show with Stage East, will portray protagonist George Bailey’s s absent-minded Uncle Billy and his father Peter, as well as Gower the pharmacist, Martini the bar owner, and a few other small roles  “I’d never seen the film, and watched it for the first time with my wife and kids the night before our first rehearsal,” he said. “It’s been a treat getting to try and stretch my abilities and portray several very different characters.”

Eastporter Don Bailey echoes this sentiment: “I really enjoy switching between characters. I wear a couple different hats and change my voice to distinguish between them.” Bailey, whose theatre credits include both onstage work and backstage duties, plays characters both mild and menacing: from Joseph, the head angel who advises aspiring angel Clarence, to the villain of the piece—the scheming Mr. Potter—as well as three other smaller roles.

Another auditory effort—the creation of sound effects to support the actors’ work, is being led by Brian Schuth, with assistance from cast members Kathleen Dunbar, Kaitlin Stellrecht and Don Bailey. “There’s something deeply satisfying about creating a whole world out of nothing but people talking and a collection of creative sounds,” said Schuth. “I love leaving technology behind and doing things by hand, so doing sound effects for this show is right up my alley. Some of them are really simple—like putting high heels on a hard surface to make the sound of someone walking in high heels. We have an old-fashioned “wind machine”, and Gene Nichols of UMM has lent us a variety of noise makers as well.”

Tickets are $8, and are available at the door or via eastportartscenter.org; attendees 17 and under will be admitted free of charge. Attendees are encouraged to arrive early (the house opens half an hour before the performances) for live music and sing-a-long songs performed by Beth Goodliff, Brian Schuth and Lauren Koss.

Stage East, a constituent member of Eastport Arts Center, is a non-profit, 501c3 organization which has been a community theater for 29 years. The group’s mission is to further the theater arts in Washington County. As a volunteer organization, Stage East depends on support from grants, local businesses and individuals.