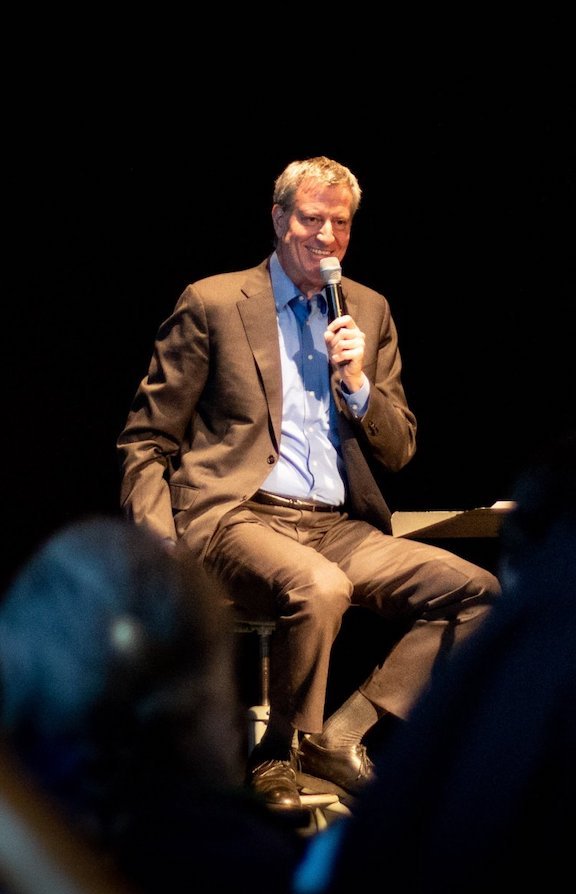 The Eastport Arts Center is excited to announce an appearance by Bill de Blasio, the Mayor of New York City and recent presidential candidate, on Saturday, January 18 at 1 pm. He will give an informal talk entitled “Reflections on America” and take questions afterwards. EAC is particularly proud to present this nationally recognized politician on his third recent visit to rural Maine. This event is a special benefit for the center, in support of its many programs.

“What I love about the Eastport Arts Center is that it’s a place for everyone,” said de Blasio, who will make his third EAC appearance with this trip. “I have met lifelong actors and musicians alongside brand new beginners, and everyone is treated with the same respect. A sense of welcome pervades this place.”

De Blasio’s Eastport ties are centered around his Aunt Jean Wilhelm, a longtime EAC and Stage East Board member who worked mightily to create the center’s theater space on Washington Street. He has been visiting his aunt in the island city for years. Staff members and EAC community fondly remember the exciting occasion of Wilhelm’s 90th birthday party, when among a showcase of theater monologues, songs, and sketches, nephew Bill joined the festivities with a tribute to his aunt.

“Eastport always gives me a sense of hope,” said de Blasio. “It’s a place where people place a real value on building community. Whatever we may have lost in recent years in this country, Eastport reminds us it can be found again.”

Mayor de Blasio, currently serving his second term, has been a player on the national political scene for many years. Born in New York, he grew up in Massachusetts embraced by his mother’s family amid the difficulties faced by his father resulting from service in World War II.  A graduate of NYU and Columbia University, de Blasio cut his political chops as a regional HUD Administrator, New York City Council member and the city’s Public Advocate before being elected to his current office in 2014.

The EAC, which provides year-round programming for Maine’s smallest city, including theater, art, music, film, education and community outreach, aims to stimulate and nurture an appreciation of the visual and performing arts and the creative process, and to provide a home and an environment within the community where they can prosper.

Admission for the event will be by $25 donation at the door or in advance at eastportartscenter.org. Eastport Arts Center is at 36 Washington Street, Eastport, and is fully handicapped accessible.