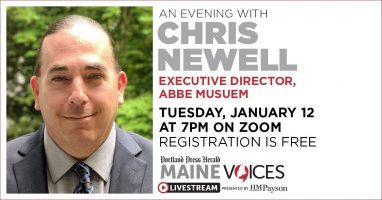 Chris Newell (Passamaquoddy) is the executive director and senior partner to Wabanaki Nations at the Abbe Museum in Bar Harbor. He is the first Wabanaki Nation member to lead the museum, a recognized innovator in decolonizing museum practices. Newell believes education is a path to making the world a better place for all people and looks forward to a better, well-informed future for us all.
Newell is a lifelong educator and served for six years as the Education Supervisor for the Mashantucket Pequot Museum and Research Center in Ledyard, Conn. He and his colleagues at that museum co-founded the Akomawt Educational Initiative to respond to the lack of representation of Native history and social studies in public schools in New England.
Newell was the senior adviser on the Emmy-winning documentary “Dawnland,” chronicling the first-ever, government-sanctioned Truth and Reconciliation Commission in the State of Maine. He is also a member of the Mystic River singers, an internationally acclaimed and award-winning inter-tribal pow wow drum group.
Newell was born and raised in Motahkmikuhk (Indian Township, ME) and is a proud citizen of the Passamaquoddy Tribe at Indian Township.
Chris Newell will be interviewed by Bob Keyes, Portland Press Herald arts reporter.
+ Google Calendar+ iCal Export