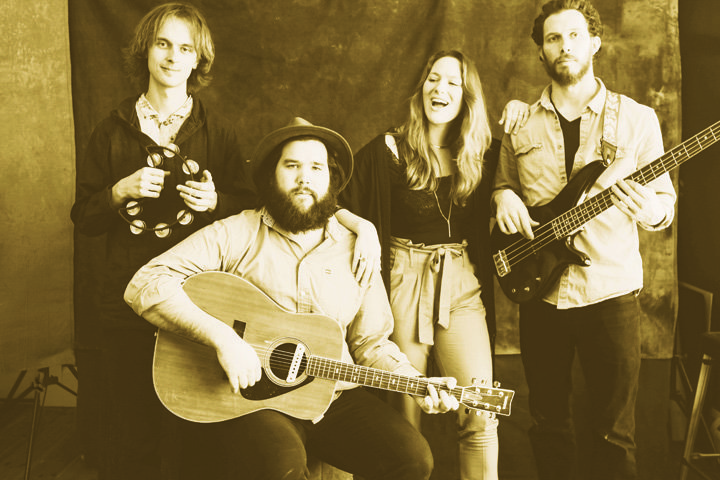 Eastport Arts Center is thrilled to welcome Portland-based indie soul-folk group GoldenOak for a special concert on June 7 at 7 pm. GoldenOak, an emerging sound in the New England folk scene, is fronted by the flowing harmonies of siblings, Zak and Lena Kendall. The band’s carefully crafted songs and poetic lyrics paint a picture of Maine’s landscape and community, and the feeling of growing up in the Maine woods. The band is joined by their percussion player, Jackson Cromwell, and bass player, Mike Knowles, who is a native of Washington County and whose family still lives in the area.

“I grew up in Charlotte, taking music lessons in the area. Really, my whole family did, and my older brother and I actually played at the Eastport Arts Center when we were younger,” said Knowles. “As we grow, so does our music, and I am so excited to bring back a different genre of music to the area I grew up in.”

GoldenOak released their first album, Pleasant St. in 2016. This album with beautiful instrumentation and voice solidified the band as ambassadors of the Maine Folk Scene. In October 2017, GoldenOak released Foxgloves, a 6 track EP that builds on Zak and Lena’s folk roots with a remarkable orchestral approach and earthy sound; in December Foxgloves was voted “EP of the Year” by the Portland Music Awards. In April 2019 GoldenOak released two new singles, “River” and “Poet and the Painter” which have gained recognition internationally and can be heard on many radio stations and Spotify playlists. These two new songs find the collective simultaneously building on previous strengths while also striking out in an interesting new direction. Over the last few years, they have shared the stage with many notable artists such as The Ghost of Paul Revere, Dustbowl Revival, The Marshall Tucker Band, Lady Lamb, Adam Ezra, and The Mallett Brothers Band.

In many ways, the themes of GoldenOak’s music are driven by their home base. “Maine is such an interesting place to be an artist,” Zak says. “It’s so remote in a lot of ways. And the landscape and the woods are so inspiring. People are often spread out, but there’s also this amazing artistic community, not only in Portland but also in the towns all over Maine.” GoldenOak is  excited to be coming to the Eastport Arts Center and to share their new music. You can find them on Spotify, Apple Music, or wherever you listen to music. Visit their website www.goldenoakband.com to learn more.

Tickets for the show are $10, and are available at the door or at eastportartscenter.org; attendees 17 & under will be admitted free of charge. The Eastport Arts Center is at 36 Washington Street, Eastport, and is handicapped-accessible.