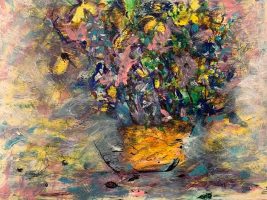 Dastardly Dick’s Wicked Good Coffee in Eastport is excited to display and sell the paintings of Dominic Noe. Aside from being an active artist in the local scene, Noe frequently volunteered at Stage East on and off stage and sat on the organization’s board from 2004-2008. A celebration of Noe’s life and work, the sale is currently on view and will run through the summer season. Proceeds will be donated to Stage East.

“Dom loved being in and around the theater, and he helped with many different jobs on numerous productions, including appearing on stage,” wrote Brian Schuth, Stage East President. “I remember him most vividly when he had the starting role as the detective in a play called The Butler Did It (yes, that was really its name). Dom was a gentle man with a vivid personality; in this play he magnified himself so that the vividness gave him the ability to control the scene – and when his character questioned me, I felt that gentleness transformed into an unexpectedly intimidating interrogative intensity. He always expressed gratitude to be part of the theater; and I was grateful to have known him and to have had him be part of our organization.”

Elizabeth Ostrander, a fellow artist and Noe’s close friend, prepared an artist’s statement for the sale, which is excerpted below:

“Creating paintings filled with light, mood, and beauty was Dominic’s intention. He began painting as a teenager, inspired by impressionist paintings. Eventually, pointillism and abstraction also became other important influences. Some of his favorites: Renoir, Monet, Kahlo, and Seurat.”

Stage East is a constituent group of Eastport Arts Center. More information about the group may be found at stageeast.org.