An event every week that begins at 12:00 am on Monday and Wednesday, repeating until February 12, 2021 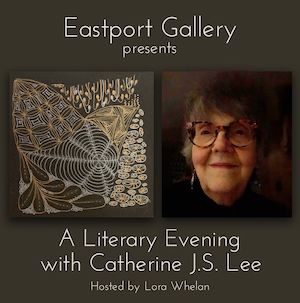 The Eastport Gallery presents a virtual literary talk with Catherine J.S. Lee exploring her fiction, haiku and haibun. The talk, hosted by Lora Whelan is available to view online.
A seventh-generation Mainer, Catherine J.S. Lee began writing haiku in 2007 and found immediate success, publishing widely, winning numerous awards, and being named an “emerging voice in English-language haiku” in Red Moon Press’s A New Resonance series. She won the 2010 Turtle Light Press Haiku Chapbook Competition for her collection, All That Remains, and was invited to edit the annual members’ anthology of the Haiku Society of America in 2015.
+ Google Calendar+ iCal Export