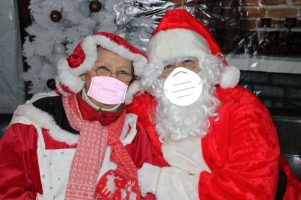 The 23rd Annual Lioness Christmas Parade is slated for Friday, December 4th. As in prior years, it will begin at the Dead River parking area, then proceed right through downtown Calais to Union Street.
Although Santa and Mrs. Claus won’t be meeting with each child after the parade, kids will get to see them both in the parade, along with all the Lioness elves.
It’s a great opportunity to shop locally as merchants all throughout town will be open with their Moonlight Madness sales and specials!
Want to take part in this great community tradition as a parade participant? It is free to enter, however, a parade application MUST be completed and returned by Thursday, Dec. 3rd–NO EXCEPTIONS. These will include special COVID guidelines that must be followed.
Email JaynaMSmith@hotmail.com or pick one up at the city building starting Nov. 2nd.
Big thanks to WQDY, The Calais Advertiser, Calais Police/Fire/Public Works, Pratt Dealership, Jamie Bohanon, and Dennis Brown.
+ Google Calendar+ iCal Export